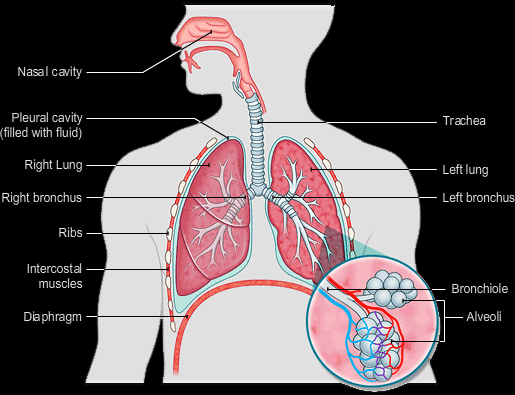 We rarely think about breathing unless we’re out of breath. The act of breathing is part of the respiratory system, a complex process where air travels into and out of the lungs.

Respiration is slightly different, where exercise causes muscles to release energy in the form of glucose. Both systems are co-dependent, especially when you’re playing sport and inhaling greater quantities of oxygen.

Bronchi: when the trachea reaches the lungs, it is divided into two tubes, one goes to the right lung and one goes to the left lung. These are called the bronchi. The bronchi are then divided bronchioles that extended deeper into the lungs.

During Exhaling, the diaphragm and the inter costal muscles relax again, contracting the thoracic cavity thus squeezing the air out of the lungs to the trachea and mouth and nose to the atmosphere.

Gas exchange happens because of several factors in the alveolus and the blood capillaries that control the rate of gas exchange:

Composition of Inspired and Expired Air:

When lungs of an adult are fully inflated they have a volume of about 5 litres.

Tidal Volume: This is the volume of air breathed in and out at rest, this is 0.5 litres.

Vital Volume: The maximum volume of air that can be breathed in and out, at exercise for example is 3 litres.

Residual Volume: The lungs have to have a certain volume of air inside them all the time to keep shape. This is the residual volume and it is 1.5 litres. This air is renewed through breathing.

A chemical, metabolic reaction that burns down glucose with oxygen producing carbon dioxide, water vapour and lots of energy

Aerobic Respiration: the release of relatively large amounts of energy in cells by the breakdown of food substances in the presence of oxygen.

Some organisms are able to respire and release energy when oxygen is lacking. This is anaerobic respiration. These are like yeast, bacteria and other organisms. Humans can also respire anaerobically for a short period of time. The amount of energy produce is much smaller than that produced during aerobic respiration though.

Anaerobic respiration: the release of relatively small amount of energy by the breakdown of food substances in the absence of oxygen.

Anaerobic Respiration I Yeast: Yeast is able to respire anaerobically by breaking down glucose molecules into ethanol and carbon dioxide.

Ethanol is produced here, so it is a fermentation reaction. Do remember that glucose is the only reactant.

When the amount of oxygen received by the muscle cells of the body is not enough to carry out all respiration aerobically, the cells respire anaerobically. But they cannot go like that for a long time. The anaerobic respiration in humans is different than of yeast. Lactic acid is produced instead of ethanol, and no carbon dioxide is produced.

Previous Topic
Back to Subject
Next Topic